The Leader of the Opposition, John Briceño has written to the British High Commissioner in Belize as well as to the Caribbean Development Bank in Barbados. The United Kingdom and the C.D.B. have provided funding to the government of about one hundred and twenty-two million dollars for the Coastal Road Rehabilitation project.  Work started on Monday on the thirty-six-mile stretch of road, which was attended by the U.K. and C.D.B. reps.  The Opposition has opposed the contract for road works which went to Imer Hernandez since it did not follow the process and was not tabled in the National Assembly after it was penned in December 2019. Neither was it perused by the Contractor General since there was none in place at the time.  Briceño points out that the required oversight cannot be waived and as such the Opposition does not regard the contract to have been awarded in accordance with the law. In referring to the Chief Justice’s ruling that that the government has spent in excess of one point five billion dollars unlawfully and unconstitutionally, Briceño says that G.O.B. has for years, flouted the laws of procurement and expenditures. 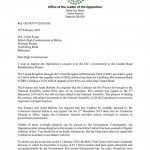 The Leader of the Opposition also notes that aside from the record of incompetence by Hernandez, the company he has partnered with, Construcciones y Carreteras, is apparently under investigation in Mexico for fraud. In the circumstances, Briceño also asks for evidence to show that the laws of Belize have complied with in respect of the one hundred and thirty million dollar project.

John Saldivar Will be Brought in for Interrogation