The Statistical Institute of Belize has presented grim news on the economy which shows that the recession it hard. For the first time in almost a decade, the economy contracted by as much as two point eight percent in the last quarter of the year with nineteen million dollars less in goods and services produced in 2019.  The drought, which hit farmers last year, caused a sharp decline in agricultural industry, particularly sugar, citrus and banana production. The import bill shows that more than two billion dollars worth of goods were imported and exports went up by seventeen point nine million dollars in 2019, representing twenty-one percent of total value of imported goods. Here is Duane Moody with a report. 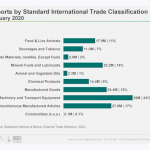 The economy declined by two point eight percent in the fourth quarter of 2019. That’s the overall estimate coming out of the Statistical Institute of Belize on the Gross Domestic Product of the country. This is the first time since 2011 that the last quarter is recording a contraction in the economy. With another prolonged drought predicted in the coming months, the S.I.B. figures show that the extended dry weather of 2019 impacted primary and secondary industries in Belize. So much so, that when compared to 2018, the GDP during the months of October and December of 2019 was down by nineteen million dollars.

While there was an increase in the area of livestock production, the sharp decrease in the agricultural industries, drove the numbers down. 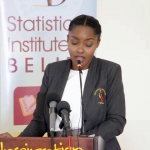 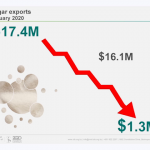 As it relates to external trade, that too impacted the overall figures. In 2019 alone, two billion dollars worth of goods were imported; which was up by fifty-six point three million dollars when compared to 2018. Exports went up by seventeen point nine million dollars in 2019 to less than twenty-one percent of total value of imported goods. Statistician Jefte Ochaeta says that the 2020 figures for January are not looking too good. Imports are already down point six percent when compared to 2019. Ochaeta says that there is a massive decrease in sugar exports for the first month of the New Year due to the late start of the sugar crop. 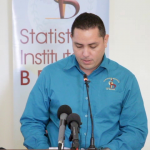 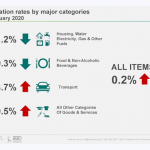 The cost of living for the month of January 2020, went up by point two percent. According to the S.I.B. report, the increase, although small, was due to higher airfares and education fees. While those increases were offset by lower food prices, Belizean households are still feeling the pinch. 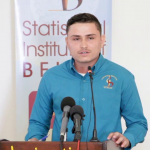 “Looking at the major categories affecting the inflation rate, the housing water, electricity, gas and other fuel had a decrease of one point two percent. The food and non-alcohol beverages category also had a decrease of zero point three percent and the transport category had a significant increase of three point seven percent. And for the purpose of this presentation, we grouped the remaining goods and services into the all other categories of goods and services which had an increase of zero point five percent. We can now see that the significant increase in the transport category was partially balanced.”

Tourism is categorized as one of the biggest contributors to the country’s G.D.P. In this tertiary sector, there was a decrease of five point seven percent in the hotel and restaurant subsector; that is offset by an increase in the transport, storage and communication sector. Of note is that even though there was an increase in overnight tourist arrivals and a one point one percent rise in hotel room revenue, fifteen fewer cruise ship called to port during the fourth quarter, considerably reducing the overall figures. 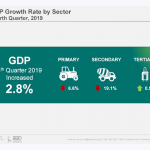 An Update on the Upcoming Population & Housing Census

An Update on the Upcoming Population & Housing Census