P.U.P. Gets Battle Ready; National Demonstration to be Held

P.U.P. Gets Battle Ready; National Demonstration to be Held

The People’s United Party is mobilizing to hold a national demonstration against corruption in government and others ills.  Leader John Briceño sounded the clarion this morning as the fallout from the John Saldivar saga continues to unravel. Briceño invited the social partners, the private sector and all Belizeans to join and march in Belize City.  The P.U.P. has not had a demonstration for some time so the event is expected to galvanize its supporters and show muscle as the government in waiting. Here is News Five’s Hipolito Novelo with a report.

The People’s United Party is seizing the day, and Leader John Briceno has given the orders to the party’s thirty one standard bearers to mobilize the masses for a national demonstration against the rampant corruption that has been plaguing the U.D.P. Government. Scandals are at a boiling point and the opposition is ready to take it to the streets. 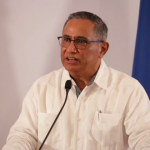 “The time for talking is at an end. Yesterday I directed all our standard bearers to begin intense efforts to culminate with a massive mobilizing through the streets of Belize. And on Monday we are going to announce that date so that we could get all citizens, P.U.P., U.D.P., Social Partners, Private Sector to join together, to join as Belizeans and to ensure to tell Barrow in one word, Enough is Enough. End with the corruption!”

Supported by a room filled by P.U.P. area representatives, executive members and supporters, Briceño’s says that the demonstration should take place within a week from Monday. The P.U.P. will march in the Old Capital where every single Belizean can express their displeasure. 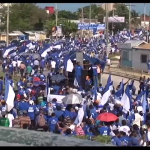 “Not only the P.U.P.s, but even the private sector, social partners, N.G.O. community anybody who wants to join to show the displeasure t how Dean Barrow and the U.D.P. have been managing the country can join us on that day.”

“Do you believe that Belizeans are ready to come out to the streets because as you may know some political supporters are very loyal to their party?” 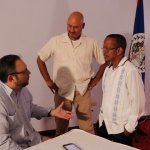 “Well that is for them to decide, if they are tired of corruption, if they want to see a difference in how we do things in the country, how we manage the finances of the people to see how we bring more competence and more accountability and to try to bring an end of corruption then they have a responsibility as a citizen of this country to come out and march as a group. It is not going to be just a P.U.P. demonstration. It is going to be a demonstration by the people of this country.”

“However, it will take money to amass that amount of people in the old capital.”

“We all know that and we have to see how we can do that with the little that we have but what is important is to show out outrage.” 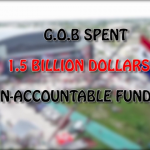 And that outrage, Briceño says, should be rooted in what he describes as the gross mismanagement of the country’s finances and the latest revelations of bribery added to the Saldivar Scandal.

“The effects of this U.D.P. government has caused a decade of suffering. It ends now. We will no longer allow criminals to hold office of Prime Minister in this country. We will not wait on the government to act and we have no confidence that they will.  Imagine one point one billion dollars and a hundred million dollars that they spent and they forget to bring it to the house. How can we allow that to continue? We have the present minister of police, the Minister of National Security who one is on a indefinite suspension and the other is saying that he is the Minister of Police.  How can you have the police investigate their own boss? The Prime Minister is taking us for a mockery, for fools. And I think people have had enough.”

But has the public had enough to allow the P.U.P. to reign in government once more? The party’s national demonstration will indicate if the country truly craves a new government. 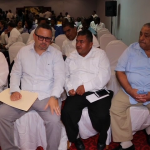 “What we are accused back then to what is happening now is far worse. I am not in any way suggesting that it was but today is far worse and what makes it even, as we say in Creole parlance, what makes is ‘worserer’ is that the Prime Minister was elected on a platform to end corruption in government. He spoke of his two-sided machete and that he will chop of his head, damn the party if something goes wrong, let the party broke up or the government because we are going to stop corruption. Here we have case after case from Gaspar Vega to Castro to Penner to the immigration scandal to the issue of lands where Gaspar Vega’s son still owes four hundred thousand dollars and refuse to give the people back the money. And the list can go on.”  If citizens want to use an excuse because of back then and do nothing about that then that is their prerogative. I am telling you that we in the P.U.P. we are saying we simply cannot continue to manage the country like this. I don’t care what everybody says. The skepticism is merited and I understand that is why today we are starting to put some steps.”

“Sir, whenever the election is called if the People’s United Party fails on that day will you resign as the Party Leader?”

“Why would you ask such a leading question? Of course I will resign. I don’t think it is a matter of losing. I am very confident that we will win the next government.”

Reporting for News Five, I am Hipolito Novelo.

P.U.P. Pledges to Put an End to Corruption

How climate change is driving emigration from Central America

Steel Pans for the U.B., the Belize Bank Grants a Generous Donation