The Belize Tourism Board hosted a media forum earlier this week at the Best Western Belize Biltmore Plaza. With assistance from its North American marketing agency, ICF Next, MSNBC Live Weekend Anchor Kendis Gibson was brought to Belize to make a presentation focusing on international journalism best practices; he also fielded questions from local media personalities on how to best protect Belize’s image as a tourism destination. News Five spoke with Misty Michael of the B.T.B. and Gibson. 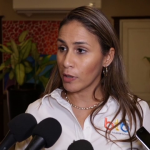 “Tourism as a number one income earner for the country that there are a lot of things that happen within the industry and sometimes the way that these stories are brought across locally has a much wider international reach. And the idea of Kendis coming in was for him to share his experience within the U.S. media and journalism landscape, to share best practices and his experience with the local media to explore ways in which we could still bring across the news that’s happening locally, but minimize the impact it could potentially have negatively on the destination.” 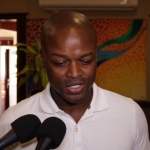 “First time I started talking about it on TV was after there was a period of time where you had a Chicago news producer from an ABC station who was killed in Cayo; you had the guy who does the security software, McAfee who was on the news at the same time—how he got away from through Guatemala or so. And all that we were hearing from Belize was the negative stuff. So part of my mission from my own little world was to try to get Belize mentioned—not necessarily in a negative way; just to get the name out there. So we mentioned the name when the Olympics came on; we made sure to put the Belize Olympic team on air—it lasted two minutes, or two seconds rather. We did a medal count and we’d mention, “Oh and Belize has none.  But it was all to contrast all the negative news that was coming out about Belize, at least from my control.”

Richard Harrison being laid to rest

Ministry of Health fires back at PUP