A group of foreign nationals charged in connection with the landing of a plane carrying sixty million dollars worth of cocaine in September of last year were back in court today. The six persons charged have been in prison for five months and today they were to appear before the Magistrate Court but the matter was adjourned. They are Miguel Cruz Meseguer, David Noe Orellano Discua, Carlos Humberto Henriquez Gomez, Juan Pablo Larea Cruz, Allan Yovani Mejia and Norlan Jose Carrasco Lopez. Today, outside of the court, reporters caught up with attorney Dickie Bradley. We note that he is not representing the accused but he says that the family of two of the accused requested his assistance to find out how the case is progressing. Here’s what he had to say to reporters about the matter. 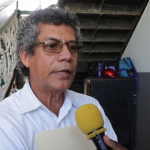 “You know that there are several accused persons. Some were found by the plane. Some were found far away. All kind of situations. But the situation in relation to factual information is that today all the persons charged in relation to a drug plane charged on the ninth of September of 2019 were brought in front of the Chief Magistrate. They were arraigned already meaning that charges have been read to them. They have not been called whether they will plead guilty or not because it is still unclear whether the trial will take place in the Magistrate’s court or be taken before a jury in the Supreme Court. The other thing is that the Chief Magistrate set the date of eighteenth of March for them to return to court and that is likely when disclosure will be available so that they are in a position to then decide if there is evidence against them, some of them if the evidence is strong, the evidence is very strong which will determine which position they will take. They are not all represented. Only a few of them have an attorney. Oswald Twist represents, I think he called two or three names. He didn’t want to share clients.”

“Could you share with us the issue of bail since they have spent about five months, will they be able to apply here or go to the Supreme Court?”

“I would imagine that it is highly unlikely that magistrate will grant bail to foreigners who are charged for Drug Trafficking in relation to what is being alleged. A plane was found. Drugs were found and persons were said to have been in the vicinity of the drugs. That area of the road, mile seven of the so called Coastal Road. It is on not on any coast. Hubert Elrington built that road to reduce the length of time  to go from Belize City to Dangriga. That is not a Coastal Road but that road, the Manatee Road, on mile seven could well be that there is some paper somewhere that it is an airstrip. It is allowed to land plane for agriculture purpose so I am not clear about that part. You are laughing.  I would think that until the disclosure is available it would be little premature for any attorney to make submissions to a magistrate at this early stage because you will have some fact that now that you have disclosure there is nothing against my client. My client was spraying his crops in the area and he heard like a plane landing and he went to see what it was.”

The accused men are to return to court on March eighteenth.

Shooting in the City! | Channel5Belize.com

Shooting in the City! | Channel5Belize.com

“Pine Street situation did not have to happen the way it did,” says Patrick Faber