Troy Polonio is Gunned Down on Raccoon Street

Troy Polonio is Gunned Down on Raccoon Street

Three persons were brutally murdered over the extended weekend. We start with the deadly and brazen shooting of Troy Polonio Junior on Monday night. Polonio Junior was on Raccoon Street where he had just picked up his girlfriend and young son. He was holding the toddler when a gunman trailing him opened fire hitting him on the chest. The toddler was not injured; Polonio Junior’s killer fled, but his father set chase behind him. News Five’s Isani Cayetano reports.

A young father was shot and killed in the presence of his infant son on Monday night in Belize City.  The gunman, whom it is believed may have followed him to this address on Raccoon Street, spared him no mercy firing twice upon the unsuspecting target in plain view of others who were gathered inside the yard.  Troy Polonio’s father just happened to have been in the vicinity when he saw the alleged killer make good his escape on foot. 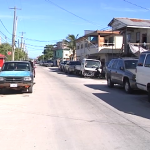 “Well yesterday, approximately after eight, minutes to nine, I was going home.  Upon reaching the intersection with Raccoon Street and the street by the police station, I saw a guy across the street running.  You know, he di run and I di wonder to myself why this dude di run like that.  I seh I shoulda follow he.  Then upon crossing the street I look to my right and when I look I sih right by my son baby ma house I sih dehn di move somebody so I swing deh and I ask if Troy alright.  Dehn seh, “No, da Troy just get shot!”

According to Polonio’s mother-in-law, who asked to remain unidentified, he had stopped by moments earlier to pick up his girlfriend and their son before returning home.  He was standing next to this vehicle when someone pounced on him and opened fire.  The grandmother, amid the chaos of gunfire, ran to the toddler’s rescue unbeknownst to her that Troy was under attack. 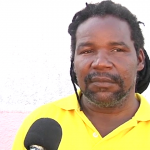 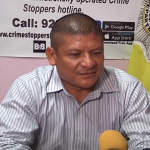 “Police responded and thereafter visited the K.H.M.H. where they found Troy Polonio with a gunshot injury to the chest.  Investigation reveals that he was hanging on the street at that particular area when a male person came up and fired two shots at him.  He was taken to the K.H.M.H. where he was pronounced dead on arrival.”

Troy Polonio Sr. told News Five that upon realizing that his son had been shot, he immediately attempted to set chase after the individual whom he observed moments earlier fleeing along Curassow Street. 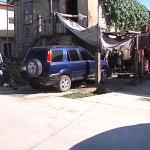 “So I sih dehn done di put ahn eena wahn vehicle so I reverse back and pursue di guy down di street deh.  But when I gaan soh now di policeman dehn cut me off.  So, you know, dehn stop and ask me all kinda dumb question and I di try explain to the man dehn well yo da my son dehn just shot and yo know, di guy just run soh eena white shirt, full white, short, dis dat.  Mein deh still di interrogate me boss and di pull gun like I da di gunman.  Anyway, so I try, afta dehn let me go, I try gaan, gaan round di next street again, di same thing bout three times so afta dat I had to call di pursuit off because I couldn’t find who shot di man.  When I come da di hospital now I sih my sista, I sih my sista and di way how I sih she di bawl I done know, she my son dead.”

Troy Junior was ruthlessly dispatched in a manner many would describe as a gangland execution.  But was the twenty-year-old affiliated with any of the Belize City gangs?

“Investigators are looking into that and I cannot confirm that at this time.”

The grieving father whose namesake son was callously taken away, has these words for Troy’s killer.

Reporting for News Five, I am Isani Cayetano.

James Adderly on Sporting Activities over the Rainy Weekend

Caye Caulker has survived several Category 5 hurricanes but will it survive the current building boom?