P.S.U. Says It Will Not Be Moved From Hilltop H.Q.

P.S.U. Says It Will Not Be Moved From Hilltop H.Q.

There is more tonight from the Public Service Union in respect of its former Hilltop property. The union says it will not be moved from its Hilltop headquarters in Belmopan.  A few days ago, the P.S.U. President Gerald Henry received a letter from attorney for Simplex Designs, Estevan Perrera, telling the union that it had until October thirty-first to get out or be evicted. But the P.S.U. is not budging, even though Henry has acknowledged that Simplex Designs is the legal owner of the property. The property was sold to Simplex Designs by the current Belmopan City Council in November 2018.  Despite meetings and negotiations, the P.S.U. was unable to recover its property. It was then decided that a new property would be located but the P.S.U. would pursue its claim to equitable interest for improvements it made to the property over several years. In light of what it says is a critical piece of evidence, however, the P.S.U. says that is it ready to battle for the property. According to Henry, the new piece of evidence has made the Council of Management reverse its initial decision and proceed to the courts. 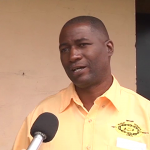 “Initially if you recall there was a mandate given to the past president for us to fight. When I got in the legal team based on information they had at the time we didn’t have so much of a strong case.  That was taken back to the membership and we said we are going to give up in terms of fighting for the property but we have always maintained that we are going to fight in regards to the equitable interest we have. Now that we have this evidence and it is pretty convincing to the legal team I am certain that the general membership is happy that we are going to take back this fight and we are not given up. They are actually the legal owners of the place. So maybe I spoke or how I said it came out the wrong way but actually they are the legal owners of the place, of the property simply because they are the ones who are registered at the lands department as the owners. That does not mean the process by which they got it was legal and so on. I think that is where the union, that is the angle that the union is taking the fight on. The process was not really done legally.”

P.S.U. Says it’s Fighting for “What Rightly Belongs to Us”

P.S.U. Says it’s Fighting for “What Rightly Belongs to Us”