This December will mark two years since Belize has been without a Contractor General. At the end of 2017 when the government attempted to re-appoint Godwin Arzu for another term, the Senate rejected the proposal since Arzu had failed to provide the required reporting. Arzu’s contract was therefore not renewed and since then his post has been vacant. According to the Prime Minister, one of the challenges in replacing Arzu is the restrictions in the law. According to the law, the contractor general cannot work for the government after he completes his term so a new piece of legislation was introduced at Friday’s House meeting that eliminates that restriction. The area representative for Freetown, Francis Fonseca, was quick to point out that the post is not one for the public service.

“We’ve been so long without a contractor general and the situation is really quite intolerable. We have advertised and advertised and we actually had an instance where there was an applicant who appeared to be completely fit and proper. We were going to see and consult and move a motion for his appointment. Then that applicant said listen I’ve thought about it and I am relatively young and this provision in the law that would prevent me ever getting a job in the public service after my appointment as Contractor General would have expired is something that I am not prepared to countenance. That person therefore withdrew the application. The N.T.U.C.B. is saying to us well advertise in the Caribbean and bring in somebody from abroad. I really think we should make another effort to get a local and it is the hope of the government that with that particularly provision being removed our chances of finding a suitably qualified applicant will increase.” 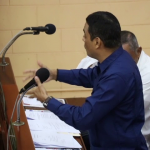 “We certainly want to place on record that we feel that it is absolutely misguided and a mistake to amend the law to remove that condition for appointment. The office of Contractor General Madam Speaker is a special creature of law. It is a special creature of governance with very specific and very critically important duties and responsibilities under the law. So the law as it stands now clearly states that it is not an office in the public service. The amendment does not change that today; it is not an office in the public service. It further states that the Contractor General should be appointed without regard of political affiliation and solely on the basis of integrity and demonstrated ability in accounting, auditing, public administration, law, management analysis, financial analyses, all of these areas.”

Land Reclamation; Who Got Paid and How Much?

Land Reclamation; Who Got Paid and How Much?

Have You Visited the Volcán Poás National Park? ⋆ The Costa Rica News