The eighteenth annual Sound Fest, a celebration of Belizean musicians organized by the Association for Belizean Artists First, kicks off tonight at the Birds Isle and promises a heavy line-up of performers in various genres, including Bruk Dong. The yearly event is held during the month of September to coincide with other activities that are geared toward promoting nationalism and love of country. This year, four major bands are on the ticket. News Five spoke with organizer and president of the local association, Tony Wright. 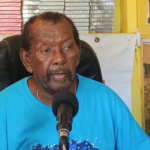 “Sound Fest is catering to Belizean artists.  The association doesn’t do anything with foreign artists, everything is about all Belizean artists.  We have noticed for instance that this year during the whole celebration we didn’t see anything from Cocono Bwai and the Bruk Dong Band.  We didn’t hear about Mr. Peters’ Boom and Chime Band and these are the backbone of Belizean music and so we had to add them to Sound Fest along with Lucio and the New Generation, along with Super Furia, you know.  And so, this year’s Sound Fest we have four big bands performing, Lucio and Super Furia, then Cocono Bwai and the Bruk Dong Band, Bruk Dong Jam Band and Mr. Peters Bruk Dong Band because we believe that fu we Septemba should focus more on our Belizean artists and what our artists have to offer.  This year will be eighteen years we have been doing Sound Fest and if you can look around in here you’ll see Mr. Peters, Lord Rhaburn, Bredda David and we work with all these guys over the years.  Not only that, but what we do also, if you notice every year we select two or three artists that we give awards to that we believe should recognize and a lot of times these artists, nobody pays them any mind, you know, so that’s one of our main ingredients with the September Celebrations.”

Tropical depression forms near The Bahamas

Police find marijuana at a farm in Corozal

Police find marijuana at a farm in Corozal

San Ignacio Hospital morgue is down