While other countries are now passing laws to permit the production, import and export of medical marijuana, Colombia has a leg up on them because it did so three years ago.

The Asociación Colombiana de Industrias de Cannabis (Asocolocanna) – Colombian Cannabis Industry Association’s 29 member companies related to the exploitation of the plant, good practices in the cultivation, manufacture and commercialization of derivatives for medicinal and scientific purposes, have invested more than US$600 million in building medical marijuana facilities.

“This is a marvelous opportunity in a country where drugs have caused so many problems,” explains Rodrigo Arcila, president of Asocolocanna, whose purpose is to promote, protect and guide the development of the cannabis industry within the legal framework in force in Colombia.

Arcila told NPR that Colombia can produce cannabis products at lower prices than competitors due to affordable land, relatively low wages and an abundance of skilled farm hands who cut their teeth in Colombia’s booming flower business.

In Colombia, cannabis is considered psychoactive if it contains more than 1% THC.

Colombia sits near the equator, giving it 12 hours of daily sunlight year-round. By contrast, countries with seasonal variations require the extensive use of artificial lights, which drives up production costs.

One of those producers is Patricia Santiago and her family, who were forced to flee their home near Colombia’s Caribbean coast after complaining about neighborhood dope dealers who, in turn, threatened to kill them. But in an odd twist, Santiago now works in the drug trade — at a medical marijuana facility.

At first, Santiago felt like she was breaking the law as she pruned and clipped cannabis plants on a plantation run by a Colombian firm called Clever Leaves. However, the government legalized medical marijuana in 2016 and now Clever Leaves is exporting cannabis-based products to Canada and the United Kingdom.

Rather than a symbol of the country’s dark past of narco-fueled violence, Santiago smiles and says, Colombian drugs “can now be used to treat people.”

At least that’s the bet of a growing number of entrepreneurs who are building vast marijuana plantations and state-of-the-art pharmaceutical laboratories that produce everything from cannabis-based pain relievers for cancer patients to dog treats that act as calming agents.

The medicinal use of cannabis and its derivatives has been legal in Colombia since 2015; and regulation in Colombia has been gradually evolving to the extent that companies have begun to enter initial production stages of cannabinoid extracts and oils.

In the ’60s and ’70s, Colombia weed, mostly grown in the Sierra Nevada mountains near the Caribbean coast, was smuggled by the tons into the United States, but, by the ’80s, the marijuana traffickers, like drug lord Pablo Escobar, soon switched to the more profitable cocaine, that sank the country into a war on drugs, which has led to mass corruption, homicide, and the displacement of an estimated 4 million Colombians over 4 decades.

In recent years Colombia — like Canada, several European and Latin American nations and many U.S. states — has taken a more permissive stance on pot. 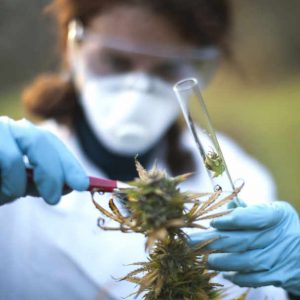 In April, Clever Leaves and Fotmer Life Sciences of Uruguay announced they will become the first to export legal medical Cannabis products from Latin America to Europe. The two will export cannabis extract and dried marijuana flowers to Germany, which they called the largest market in Europe, with an estimated 700,000 people using medicinal products derived from marijuana.

But, it’s still a longshot.

As NPR notes, it isn’t a guarantee that flowers of the Colombian medical marijuana industry will ever fully bloom — mainly due to a government bureaucracy that often forces startups to wait months or years to secure the proper permits and licenses.

“Pharmaceuticals always come from the global north to South America to Africa to Asia,” says Julián , who co-founded Clever Leaves in 2016. “This is something that is changing that model. This is from Colombia to the world.”

But, with storied infrastructure, an optimal growing climate, and cheap land prices, the Colombian medical marijuana market has all the shakings to become a new drug powerhouse.

Only this time, it’s one that might just help people.

Article originally appeared on Today Colombia and is republished here with permission.

UNCAC on the move, Coastal Road contract handed over