World Prevention Suicide Day is held globally to raise awareness of mental health issues that lead to suicide. The highest rate of suicide takes place among young people so this morning at Wesley High School, a ceremony was held to spread the message that by working together, lives can be saved because suicide is preventable. News Five’s Isani Cayetano reports.

Across the world, one person dies by suicide every forty seconds.  Every death is a misfortune for family, friends and colleagues, yet suicides are avoidable.  It is the second leading cause of death among young people between fifteen and twenty-nine-years-old, after fatal road traffic accidents.  In Belize, the suicide rate is fairly low when compared with homicide statistics.

“Every year on September tenth, it’s World Suicide Prevention Day but, you know, it’s Belize and we have September tenth special for something else so we’re recognizing that day today, September ninth.  This year we’re doing it here at Wesley College.  They are hosting this ceremony for us that we normally do every year and it’s done in the other districts as well.”

The most common forms of taking one’s own life are hanging, pesticide self-poisoning and firearms.  Key interventions that have shown success in reducing suicides are limiting access to means; educating the media on responsible reporting of suicides and implementing programs among youths to build life skills that enable them to face life stresses. 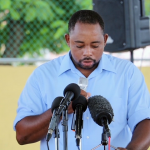 Suicide and non-fatal suicidal behaviour are major public and mental health problems.  Data from the World Health Organization indicate that approximately one million people worldwide die by suicide each year, exceeding the number of deaths due to homicide and war combined. 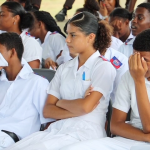 This morning at Yarborough, several high schools came together for a flag raising ceremony.  The purpose of World Suicide Prevention Day is to raise awareness around the globe that suicide can be prevented. 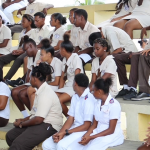 “Last year, if I could call it that, was a trouble year for us.  That was one of our highest numbers, we had thirty-one completed suicides last year which is higher than many of the past years where we were in the lower twenties.  For this year 2019, we have seven unconfirmed.  So the numbers are low, let’s keep it low.”

UNCAC on the move, Coastal Road contract handed over