Concerns are growing for missing teenager Christopher Chi. A Jasmine Alert has been issued for the fourteen-year-old youth of Yo Creek Village in Orange Walk. Christopher was last seen with a so-called friend on Friday, September sixth. Christopher and the male person were on a motorcycle. Since then, his family has not heard from or seen him. The male person who is being treated as a suspect is in police custody. He is known to police and according to investigators; the man is not cooperating with police.

“What was reported to the police, that he was last seen on Friday afternoon in the company of a male person on a motorbike in Yo Creek Village. A poster has been put out in order to for any information that is available that can assist us in locating him. The person who he was last seen with is in police custody and is being interviewed at this time.”

“Is he cooperating with police?” 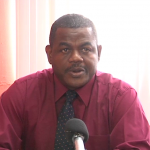 “Do you know how long the male person knows this boy?”

“He is not even indicating that. However this person is in custody and is known to the police.”

“The parents of this boy, have they indicated whether or not this individual has some sort of relations with this boy, in terms of family?”

“Apparently he has. He has been seen hanging out with this person.”