Gunshots rang out in the vicinity of the Inspiration Center late on Sunday night and when the shooting subsided forty-four-year-old Brindel Munnings was suffering from multiple injuries to the body.  According to investigators, Munnings had a previous misunderstanding with someone who may have waylaid him as he made his way through an alley that adjoins Police Street.  Three persons have since been taken into custody and police are seeking a fourth in connection with the armed assault of Munnings. 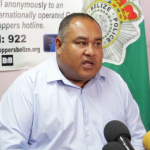 “We commence with the shooting last night of Mr. Brindel Munnings, forty-four-year-old Belizean.  What we understand is that he was walking behind Inspiration Center.  There is an alley that leads from there to Police Street and this was at just before eleven o’clock he was riding his bicycle when he was approached by a male person who fired shots at him causing injury to his body.  He was transported to the Karl Heusner Memorial Hospital where he is presently admitted in a critical condition at this moment.  So far police have detained three persons and are looking for one male person that can assist in this investigation.”

“Brindel Munnings, for whatever reason, seems to be someone well-known in certain circles.  What do you believe may have been the reason behind his attack?  Is it gang motivated?”

“No, we have spoken to family members and what we understand is that it’s a dispute [between] him and the suspected shooter, you know.”