Deputy Prime Minister and Minister of Education Patrick Faber also made a comment on the increase in the Social Security contributions. It’s been seventeen years since an increase and there has been a delay in another since 2012 for various reasons, including political likeability.  G.O.B. has now given the nod of approval to the Social Security Board following consultations with the private sector. But why seven years later? DPM Faber explains the importance of the S.S.B. initiative and also took a jab at the P.U.P. for their comments earlier this week. 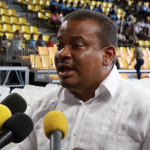 “It is never a pleasant thing to say to people you have to contribute more. Even though I think the S.S.B. has made it crystal clear that the livelihood, the sustenance of this initiative needs some more money; and it is really just that. I mean if you listen to the S.S.B. folks explain things, they will share with you how much more than what each individual contributes to the scheme, those individuals get upon retirement and for the many years that they exist or they live after they reach retirement age and in some cases, for their families after they pass on. So there can be no dispute that the benefits far outweigh what we put in. And so while it is that it is unfortunate that we have to ask for that kind of increase, I think it is indisputable that this is something that is very much necessary. We reject wholeheartedly those comments, especially coming from the Opposition that says that our administration in fact has used the S.S.B. as a slush fund. That may have been once upon a time, but certainly not under this administration. And we emphasize that wholeheartedly. And we ask the Belizean people to be mindful that this is an initiative that all Belizeans need and we cannot afford to have this initiative collapse because it is so very necessary for the sustenance especially of our retired folks, our elderly folks.”

A Day At The Museum

A Day At The Museum