The situation at Belmopan Comprehensive High School, where teachers and students have been protesting the participation of several fourth form students in this year’s graduation, despite not meeting the requirements, is not as grave as it appears to be.  That’s according to Minister of Education Patrick Faber, who says that the practice of allowing students to march up and then have them do remedial courses to make up for bad grades, is not out of the ordinary, particularly since they won’t be receiving certificates during the commencement ceremony. 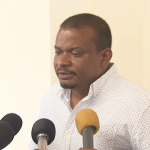 “Our position is that, as far as I understand it, the school merely said that they will allow the students to participate in the ceremony.  They will not be given the diploma and that, to me, is not an abnormal practice.  What says that you are a graduate of high school is that piece of paper officially sealed and signed by the officials of this school and it is not abnormal for a school to say, I know because I have been a high school administrator myself and I have been involved in this business for many, many years, as you know.  It is not abnormal for the school to say, “You know what, there are some who have not made the mark and you would have to do extra work, whether it be an additional exam, a retake of an exam or summer school in order for you to qualify.”  Now where I would be terribly concerned is if they were giving out the diplomas signed, sealed and delivered before the students actually made the cut, made the mark.  And as far as I am understanding, that is not the case and so while it is not a direct thing for the Ministry of Education, I keep telling people that while it is the ministry is proprietor to certain schools, it does not mean that we control directly everything that happens in that school.  And as it relates to that matter with Belmopan Comprehensive, I am understanding that it is a decision that the board which is the managing authority, made.”

Cuba Celebrates the Historic Anniversaries of Revolution and Relations with Belize