Wild sloths are common in Costa Rica and are normally great at surviving on their own, but with habitat encroachment on the rise, their survival is being challenged at an alarming rate.

When these impacted sloths arrive at the Toucan Rescue Ranch, it is usually due to dog attacks, road accidents and electrocution — all human-created factors.

Sloths get electrocuted when they use power lines to transport themselves between patches of forest. Using one power line is okay; however, if they touch two, their body completes the circuit, resulting in them getting a nasty shock and results in them falling.

Charlie was one of these unlucky sloths. At the beginning of February 2019, we received a call from the Environment and Energy Ministry (MINAE) that an injured sloth was being brought to us. As always with these calls, we never quite know what to expect, but the veterinary team prepared for the worst.

As the car pulled up the driveway and we went to receive him, we immediately saw that he was fighting for survival. This was a good sign. It took three people to wrestle Charlie from the kennel and into our veterinary clinic, where we began the examination. He appeared quite skinny and dehydrated. But this wasn’t the worst of his problems.

We saw a bare patch of burned skin running from his hand, up his arm and down his side — a clear sign of electric shock. This was a bad injury. A long, deep gash ran from his knee all the way to near his pelvis. Most of the muscle tissue inside of Charlie’s right leg was gone, and his bone and ligaments were exposed. Upon closer inspection, hundreds of maggots were revealed, making things worse. It was quite gruesome. The vet team felt that his chances for survival were low, but we did not give up hope.

He was weak, but he was in the right place to regain his strength. A vein was found and an IV line put in, providing the malnourished sloth with much-needed fluids and nutrients to increase his chances of recovery. The work began on the leg. 4 p.m. became 5 p.m. and, then 5 p.m. became 6 p.m. as the extensive cleaning progressed. It wasn’t clear whether the poor guy would make it, and even if he did, he would probably lose his leg. The good news was that he was strong and was fighting for his life, and so was the team.

The first few days were tough for Charlie. He hardly ate as his wound slowly began to recover. The vet team dedicated hours to cleaning his wound and treating his infection, and it paid off. As February turned into March, it was decided we would try a new, innovative treatment with Charlie, using tilapia skin.

Tilapia is a fish commonly found in freshwater and eaten by many all over the world. Their skin can be used as a bandage to help heal open wounds and second- or third-degree burns in humans and animals alike. After being sedated, the fish skin goes on. This is often more effective than a normal bandage, as it allows the wound to breathe and heal from the inside out, as if it were an open wound. However, the tilapia skin also conceals the wound and protects it from infection. 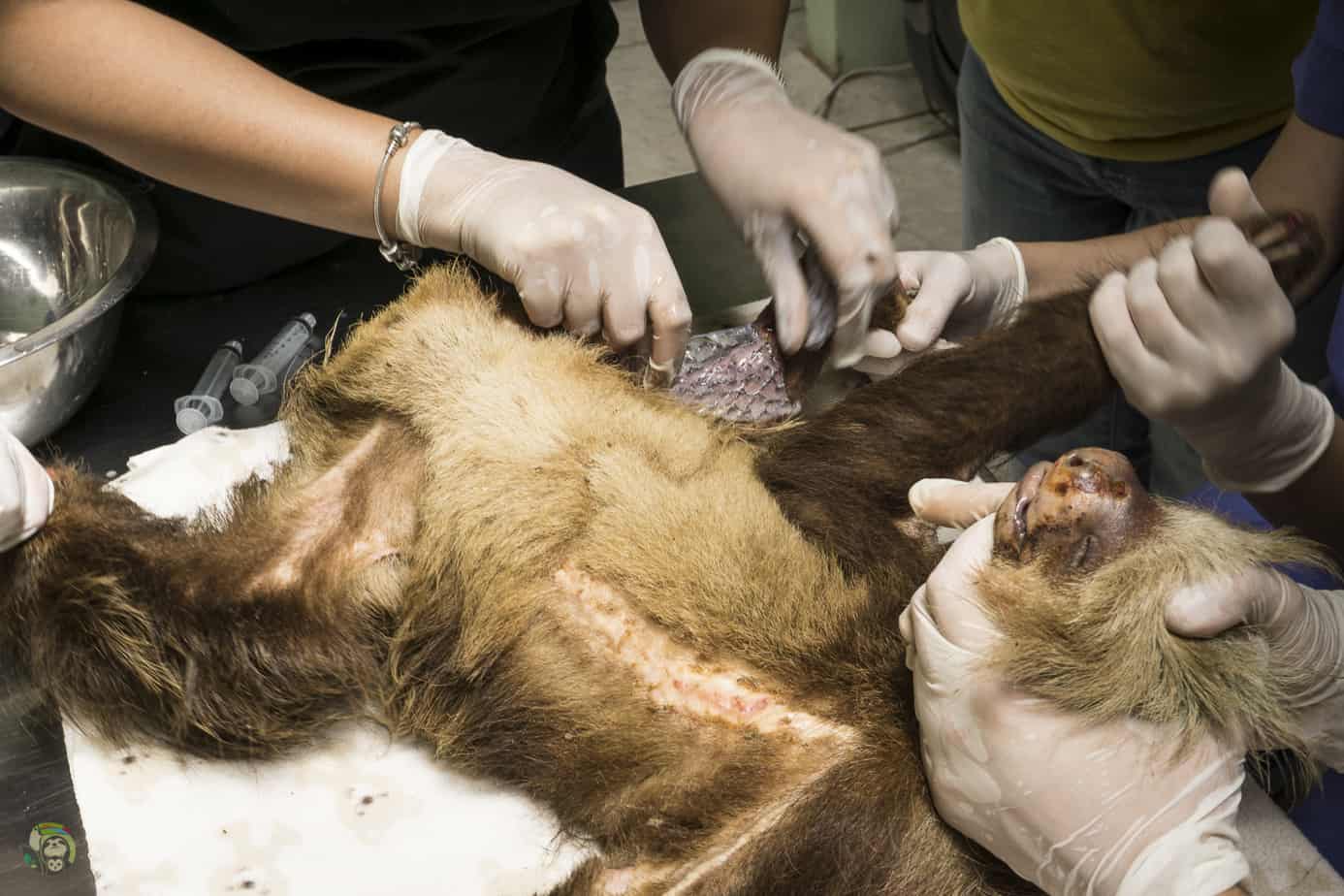 Tilapia skin helped Charlie on his way to recovery. Via Toucan Rescue Ranch.

This was perfect to aid Charlie’s recovery. It wasn’t clear whether it would be successful, but this young sloth had captured our hearts. It was worth a try.

Charlie was the first sloth to undergo this type of treatment at the Toucan Rescue Ranch. After 10 days of tilapia skin treatment, it was clear that it had worked! Charlie the sloth was now a pioneer in veterinary medicine. The wound was closing slowly. No operations, no amputations, just a strong-willed sloth and some creative veterinary thinking. Two months, five tilapia skins and many, many green beans later, it was Charlie’s turn to see the outdoors again.

Over the next few weeks, and after hours of rehabilitation in outdoor cages and on the climbing structures, Charlie gained his muscular strength back. He was no longer just mentally strong, but physically strong too. On June 4, 2019, Charlie was finally able to climb back up into the trees and was released at our animal release site in Sarapiquí on World Environment Day. Excited to return to the wild, he shot up the tree as fast as a sloth can go. Charlie was home. 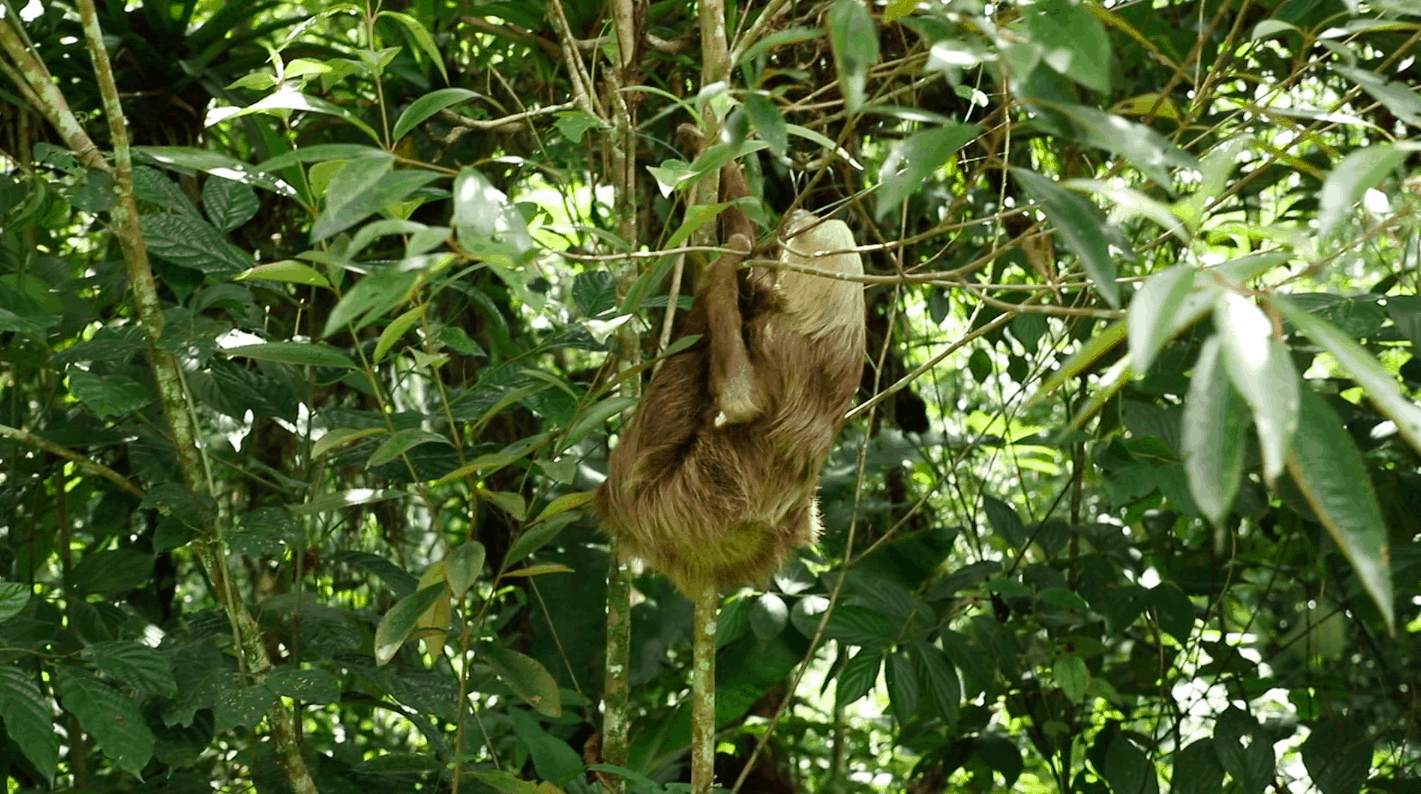 Charlie is now happy at home in the wilderness. Via Toucan Rescue Ranch.

Charlie is a testament to the great work of the Sloth Team at the Toucan Rescue Ranch, and also of the resilience and strength of sloths. It was an amazing achievement for both Charlie and the people at the Toucan Rescue Ranch to see an animal arrive in such a vulnerable state become so powerful once again. Without the help of such determined staff and such kind members of the public, Charlie wouldn’t be happily in the trees today.

— Ally Chamberlin is an intern at Toucan Rescue Ranch.

The Traditional Childhood Games of the "Ticos·