In an update to the referendum…A sitting of the House of Representatives will be held on Monday, May twentieth, to amend the Maritime Areas Act of 1992.  That decision was taken in cabinet today and comes within days of the May eighth referendum.  Fifty-five percent of Belizeans voted to take the territorial dispute between Belize and Guatemala to the International Court of Justice for final resolution. Both parties have supported to amend the Maritime Areas Act so that passage in the house is expected to be smooth.  According to a release from the Government’s Press Office, the document will then be submitted to the Senate on Tuesday.  At a press conference last Thursday, the prime minister explained it in this manner. 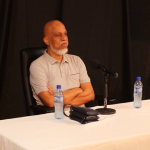 “I would have wished to go to the House on Friday, but perhaps it might be better to wait until the following week just so that as soon as Cabinet can give its approval we can send the copy of the draft bill to the opposition and for there to be enough time for them to be able to digest the draft.  I don’t think there should be any problem.  I believe that there should be agreement that in fact this is the way to go since the passage of the Maritime Areas Act was done for a specific purpose to aid in the negotiating process that at the time was ongoing with Guatemala.  Now that it is clear that we are going to court, there is no need for the MAA to continue in existence and I imagine that there will be a complete, unanimous support in the National Assembly for the amendment.  So, perhaps not next Friday but maybe the following week, either Wednesday or Friday.  Once that is done, we then notify the ICJ formally of the results of our referendum and the fact that it is on.  That we are now in a position to submit to the court’s jurisdiction and thereafter we have a month to do that and thereafter the clock starts running.  Guatemala is going to have a year to memorialize their position, we will have a year and thereafter to respond and even at that point there would still be a chance for Guatemala to reply to our response and for us to respond to their reply.  So it’s a long drawn-out process.”

Cabinet also approved the appointments of Ambassadors Assad Shoman and Alexis Rosado as agent and co-agent of the government with the specific role to represent the country in an official capacity at the I.C.J.  They are to monitor and coordinate the work ahead that Belize’s team of lawyers and other experts will undertake.