The proprietor of a grocery store in Valley of Peace, Cayo was left traumatized after he came under attack from three armed robbers. At around four o’clock on Monday evening, while Tan Jian Pan, was at Pan Store, a trio of robbers burst into the grocery store and in the blink of an eye, stole the register with hundreds of dollars. Police were called in, but there was no trace of the robbers. Here is that story with Duane Moody.

Belmopan Police continue to investigate the brazen robbery of a Chinese store in Valley of Peace, Cayo. Around four o’clock on Monday afternoon, Pan Store was targeted by armed robbers who in a matter of seconds executed the robbery. At the time, there were no customers inside the grocery store. 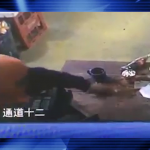 The proprietor, Tan Jian Pan, reported to police that three men, two of whom were armed with guns, entered his store and struck him on the head before escaping with the cash register.  Surveillance footage captured the entire ordeal and shows the three men—two with shirts over their heads and another with a gas mask—running into the shop. The robbers went looking for cash and one of them yanks the plug to the cash register from the electrical socket before they fled from the store. News Five understands that two thousand five hundred dollars was inside the cash register. Police reportedly arrived on the scene shortly and proceeded to comb the area, but no one has been detained for the crime. Duane Moody for News Five.

Archbishop Oscar Romero was gunned down inside his own church 38 years ago. Soon he'll become El Salvador's first saint