While all that information was revealed in the Senate, this evening, Chief Elections Officer Josephine Tamai responded to the claims contained in the letter by attorney and former U.D.P. Belize City Mayor Darrell Bradley. Tamai was not able to share the specific contents of the case because the matter is before the Public Service Commission. According to Tamai, as the letter stated, Trevor Arthur Charles Bradley did apply on July twenty-sixth, 2018 using only a Social Security Card which many other Belizeans did as well. 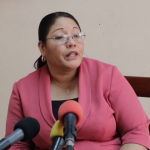 “That person applied to be registered from the twenty six of July 2019. It is not a new application. As the Chief Elections Officer, I have a responsibility to ensure that persons who are qualified to be registered electors are not disenfranchises in any way. If I have an officer who is disenfranchising persons and not accepting applications from those persons there is where yes we will have an issue because my duty is to ensure that persons are not disenfranchised if they are qualified persons. In this specific case, this person was qualified. He qualified on the twenty sixth of July under re-registration so to say that this person only took in a Social Security card the public knows that during the registration exercise persons were allowed to take in only a Social Security card and the information sent to us to verify. To say that something miraculously happened and we were able to verify only around the fifteen of March is totally false. Like I am saying these will come to light sometime in the future.”

Migrants' stories: Why they flee

Migrants' stories: Why they flee